Shazam, one of the world’s most popular apps with more than one billion downloads, today announced its annual list of 10 ARTISTS TO WATCH, predicting artists that will break out in 2017. The list includes up-and-comers like Alma, Maggie Rogers and Rag’N’Bone Man as some of the most talented emerging artists in music.

In addition, the company released a first look at the year in review with:

The Most Shazamed 2016 tracks:

Most Shazamed by category: 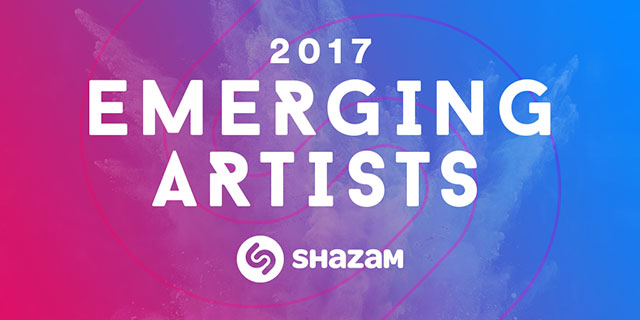 “When someone Shazams, it’s a strong signal of interest in a song,” said Rich Riley, CEO of Shazam. “With hundreds of millions of users Shazaming over 20 million times per day, we have uniquely powerful insights into the songs that people are excited about and it’s very predictive of future success.”

Shazam expects the following artists to make headlines in 2017:

This alternative pop singer from Finland has appeared in Shazam’s ‘Watch List’ in 9 different countries to date – and buzz continues to grow ahead of an album in 2017.

Hitting Shazam’s ‘Watch List’ across North America and Europe in the second half of 2016 with breakout ‘Caroline’, this Portland rapper is gearing up for a huge 12 months.

Her track ‘Alarm’ has had more than a million Shazams. She’s currently guesting on Clean Bandit’s comeback track ‘Rockabye’ alongside Sean Paul.

One of country music’s fastest rising stars, ‘Sleep Without You’ has been Shazamed almost half a million times.

The dance duo scored a hit on the Shazam charts in 2016 with ‘Capsize’. If they can build on momentum of that collaboration with singer Emily Warren, they will be an act to watch in 2017.

First appearing on Shazam’s radar back in February after she uploaded the track ‘Blue Lights’ online, this soul singer has the potential to grow way beyond her UK base.

As the voice on Jonas Blue’s ‘Perfect Strangers’, JP Cooper established himself as a brand new face for Shazam users this year. Now, solo tracks like ‘September Song’ are getting a strong Shazam reaction too.

The Atlanta rapper hit Shazam’s ‘Watch’, ‘Trending’ and ‘Hot’ lists in the US this year, as well as seeing good movement in Canada, the UK and France. After helping D.R.A.M.’s ‘Broccoli’ hit 1.9 million Shazams, he’s currently tearing it up on Charli XCX’s new single ‘After The Afterparty’, which is holding strong in our charts.

‘Alaska’ famously caught the attention of Pharrell Williams – but a healthy 140,000 music fans discovered it via Shazam too. Appearing on our ‘Watch List’ across the US, Canada, Germany, France and the UK in 2016, more great new music will only help her grow.

Hailing from near Brighton in the UK, ‘Human’ became a big hit in Europe at the end of 2016, peaking inside the Top 5 of the Worldwide Shazam chart. With 4 million Shazams already and a debut album due in in the first part of next year, 2017 is his for the taking.

A standout artist that we expect to find success found within our predictive data.

As a songwriter, Julia Michaels has worked on tracks that have been Shazamed millions of times – after collaborating with Justin Bieber, Fifth Harmony, Selena Gomez, Jason Derulo, Little Mix and Nick Jonas. Stepping out into the solo spotlight in 2017, we’re excited to see what the future holds for this talented 23-year-old.

For the complete list and additional artist detail, visit Shazam’s Annual Emerging Artists List and the Most Shazamed Tracks of 2016.